A new kind of religious magazine

One man combines truth-telling, religion and activism into a feisty, delectable read

Aiden Enns used to have the “warm, fuzzy feeling” that God was a being in the sky who watched over him, “sort of like the greatest parent anyone could ask for.” For decades he has witnessed unjust suffering and the destruction of the global climate, and has experienced the inescapable privilege of the white male. Now 55, that fuzzy feeling is gone.

“I don’t really care about faith,” Enns says. “What I do care about is alleviating suffering.”

His relationship with God now, he says, is about sharing awareness with every being. People “share some kind of awareness of each other,” he says. “I’m part of this mysterious life force that’s knitting all of life together… I feel this connection with something that’s in us, around us, part of all of us.”

How could he nurture this sense of awareness in others? How could he alleviate suffering through this feeling of connection? By starting a magazine: Geez.

In 2011, according to Statistics Canada, 24 per cent of Canadians described themselves as being unaffiliated with any particular religion. This was up from 17 per cent in 2001, and four per cent in 1971.

Religious life in Canada has grown more nuanced. Many Christians no longer see life in a dogmatic way, with God in heaven literally judging everyone to go to heaven or hell. And many of the more than eight million Canadians who are not religious are searching for ways to live a meaningful life.

“You scratch the surface of most people, and there’s some sort of spiritual yearnings going on,” says Douglas Todd, a religious columnist for the Vancouver Sun. “Geez is trying to appeal to them.”

Todd has received more than 50 journalism awards for spiritual and religious coverage. He says many Christians today are trying to “get back to the original teachings of Jesus, rather than the interpretation of the church.”

Geez magazine’s website says it has “set up camp in the outback of the spiritual commons. A bustling spot for the over-churched, out-churched, un-churched and maybe even the un-churchable.”

A self-proclaimed Christian magazine, Geez was created in 2005 by Enns and Will Braun. Both were raised in Mennonite communities, Enns in Vancouver, and Braun in rural Manitoba. (Braun left Geez in 2009, but is still a contributing editor.)

Enns worked as a reporter and editor at the Canadian Mennonite magazine from 1992-2000, and as a communications director for Mennonite Church Canada from 1997-2000. While working for the Mennonite Church, he says, “I was in the executive circle of the largest denomination, and my faith was weak and shrivelling.”

Life was too suburban and comfortable, says Enns. He wanted to make the world a better place, and didn’t see that happening where he was. It was 2000, and he was itching for change. At 39, he moved to Vancouver to pursue a Masters in Journalism. A year later he founded Buy Nothing Christmas, an initiative to encourage people to shop less at Christmastime.

During his masters he procured an internship at Adbusters, an anti-capitalist, graphically intense, culture-jamming magazine based in Vancouver. Working at Adbusters fueled the fire in his political mind, and he began to see Jesus as an “Adbusters hero”, an activist in a community oppressed by a Roman occupation.

In 2003 Enns and his partner Karen decided they wanted to move back to Winnipeg. Sitting at his desk at Adbusters, where he had become managing editor, Enns thought about potential employment opportunities in Winnipeg. Coming up short, he decided to start his own magazine.

He wanted to create a magazine for people who appreciate anti-consumerist energy, were against corporatization, and who were into their faith but wanted more.

Practice what you preach

There are two half-time employees at Geez, one being Enns, and two quarter-time workers. Every employee receives the same salary—just over minimum wage. Enns also works part-time for the John Howard Society, which works with men in prisons. (The next issue of Geez will focus on prisons.)

Geez is ad-free, only available in print, and printed on 100 percent recycled paper. The staff work out of the Knox United Church in downtown Winnipeg, a historically progressive and diverse neighbourhood. Enns says the type of work the church does in the community is a good representation of the work he would like to do through Geez, if the magazine had more resources.

In 2007 Geez was named Magazine of the Year by Canada’s Western Magazine Awards. Geez is snarky, playful at times, and provocative. It pushes its readers to think about the language they use and the choices they make.

In Through a Glass Dimly, a feature article in the summer 2016 issue, Dee Dee Risher writes, “Use language about race frequently. It will make you uncomfortable.” Geez poetry editor Melanie Dennis Unrau says the poetry in the upcoming Prisons issue consists of a series of haikus submitted by a male inmate.

The issue is scattered with fact boxes about historical activism, including the Underground Railroad, Idle No More, and the No One is Illegal campaign in Toronto, which aims to give non-status migrants critical services like healthcare.

Joyce Smith teaches religion reporting at Ryerson University. She has worked as a journalist at the Globe and Mail and the Toronto Star, and was the original director of Ryerson’s online journalism program. She also has a Masters in Journalism and a PhD in Religious Studies. Smith says journalism produced by religious groups is facing a new challenge.

“There are all the challenges that we know are present just in practicing journalism of any kind,” says Smith. But then you have to add “the logistical practicalities of religious institutions that are changing as well.” The biggest one, she says, is money. With memberships in most churches and other religious institutions going down, funds become limited.

Enns says it doesn’t really matter to him what religion he is, but he chooses to be Christian for a reason. “Christians are such a tremendous problem in North America, as the benefactors of colonialism, as settlers, as white supremacists… I have to stay in the faith—this is part of my conviction—and try to right those wrongs.”

Many journalists of all kinds, Smith says, feel journalism is their “particular calling or vocation.” This may include exposing unjust acts, revealing incredible beauty, and sharing other people’s stories.“Enns is echoing this in his conviction.” 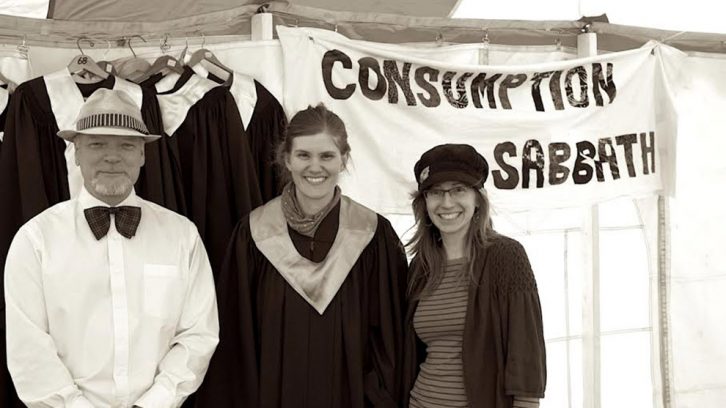 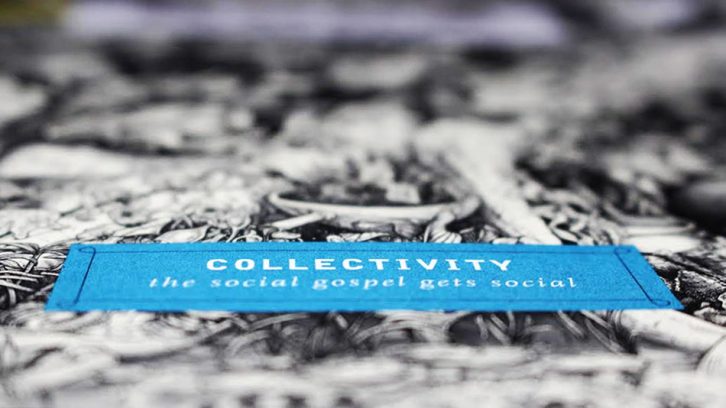 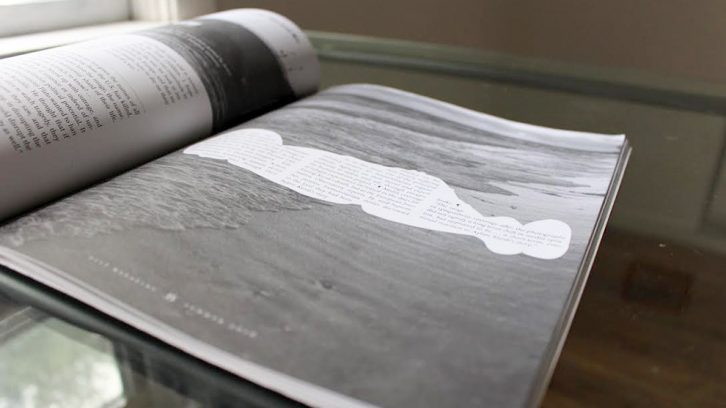 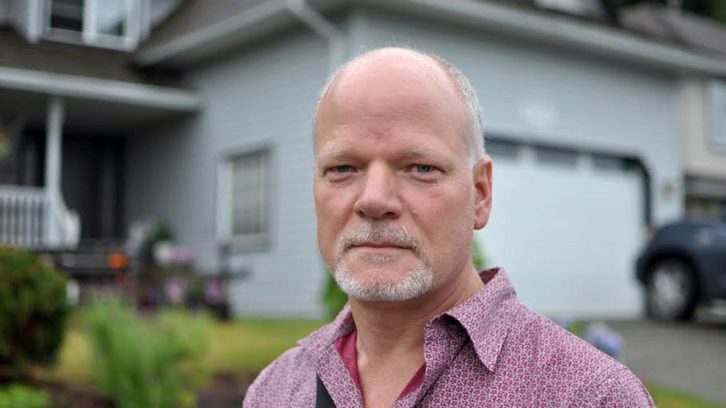 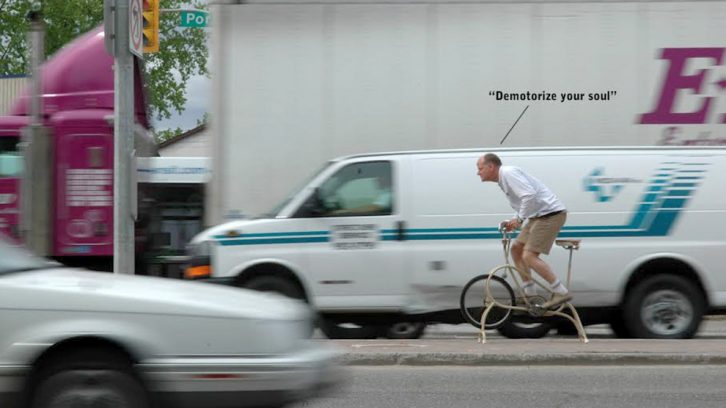 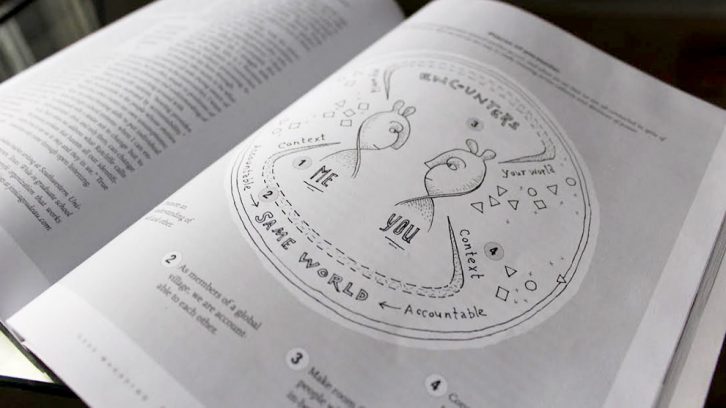 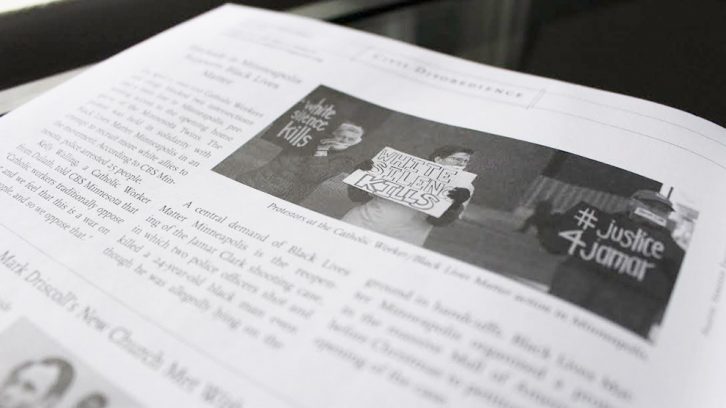 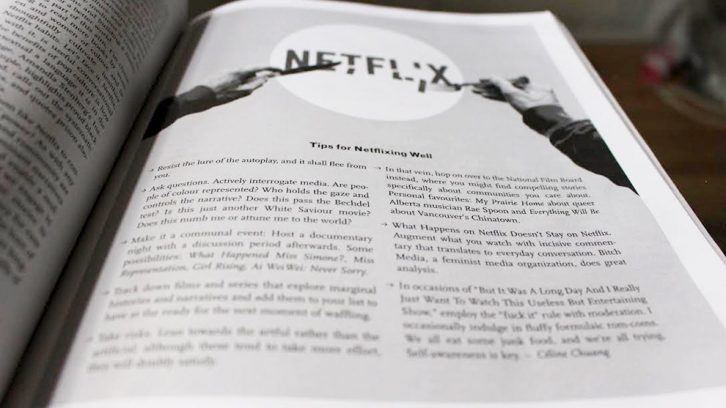 In its 34th issue, Geez changed its tagline Holy Mischief in an Age of Fast Faith to Contemplative Cultural Resistance. To Enns, this marked a shift from culture jamming to challenging people of faith to rise up. Faced with the many injustices and crises threatening our world today, including climate change and racism, Geez asks “what can people of faith do to alleviate the wrongs in this world?”

Michael Valpy says Geez is “moving outside that kind of dead language and dead liturgy that has ceased to have much, if any, appeal to [the millennial] generation.”

Valpy is a veteran journalist and author, covering political and human interest stories for the Globe and Mail until retiring from full-time journalism in 2012. Now he teaches in the School of Public Policy and Governance at the University of Toronto. In 2012, Valpy was named the 24th annual Atkinson Fellow in Public Policy, which he used to study social cohesion in Canada.

Each issue of Geez has a theme. The most recent issue theme: Collectivity. When Valpy did his research on social cohesion, he says he quickly discovered that millennials have huge difficulty with collectivity. Students’ attachment to their country is diminishing, he discovered in focus groups at the University of Toronto. “How we belong to one another,” says Valpy. “This is what I think [Enns] is after, and I think he’s right.”

Geez has 1,100 subscribers who pay $39 per year for four issues. Enns says he would like to see the magazine grow in the United States, where he feels that “progressive ways of articulating a faith” are especially needed. He says he would like to create a large enough subscriber base to pay a decent salary to a new editor who is “feminist-inspired, activist-oriented and not a white male.” 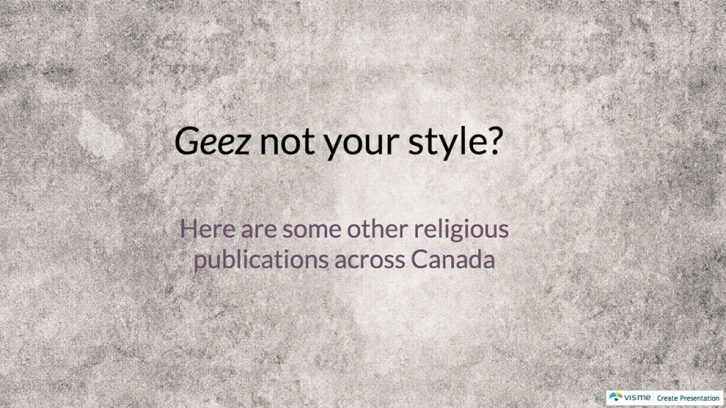 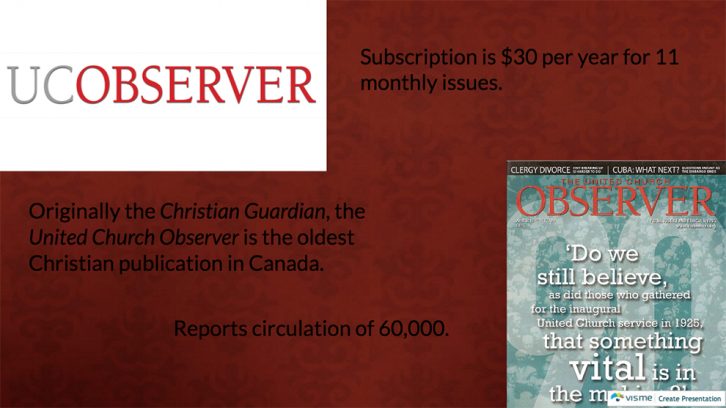 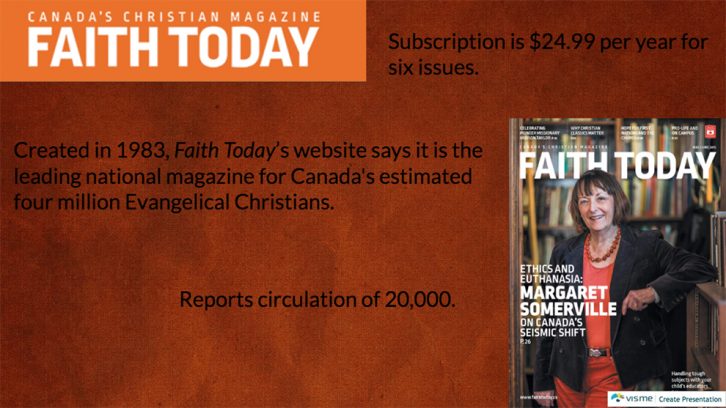 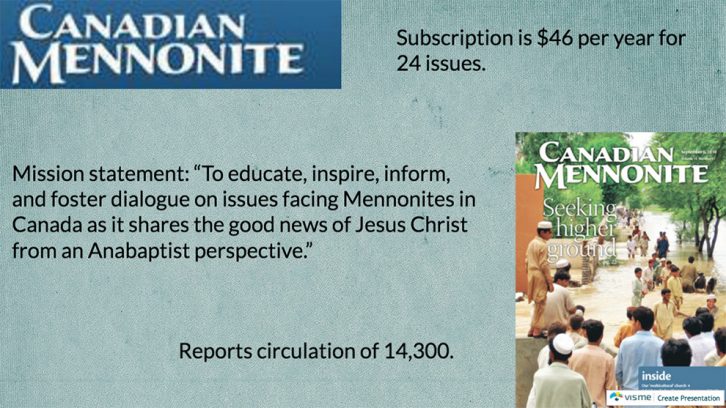 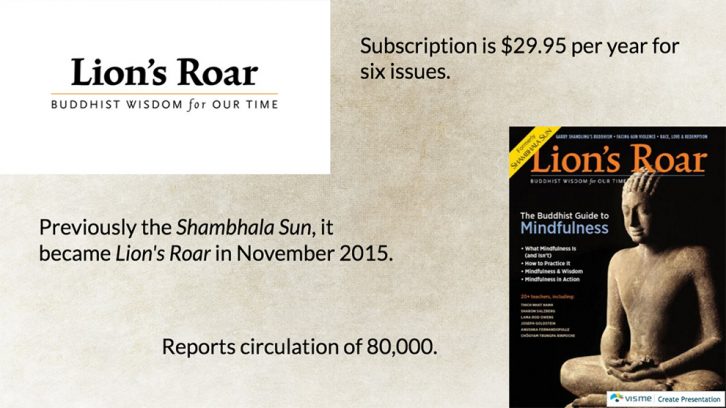 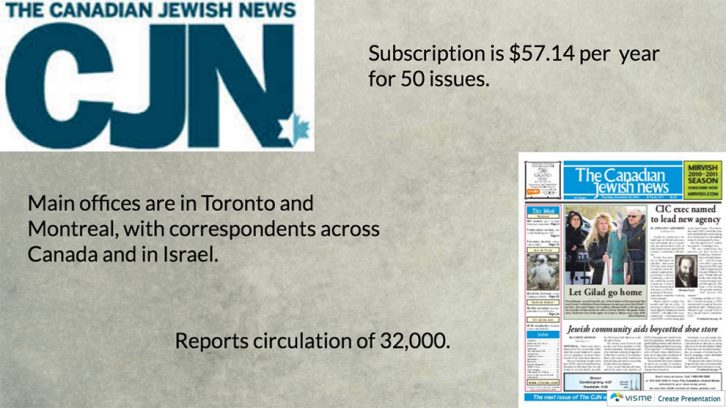 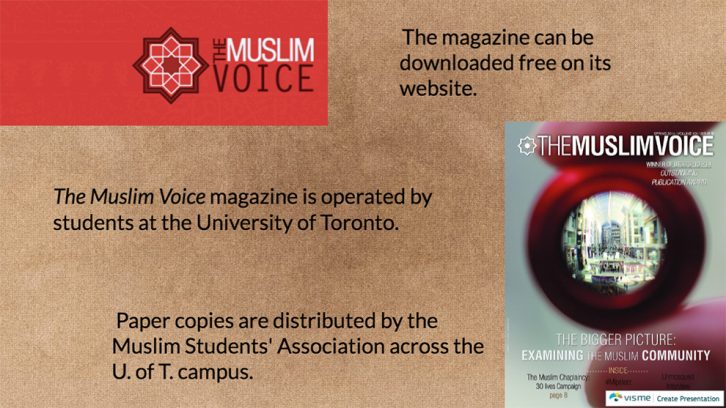 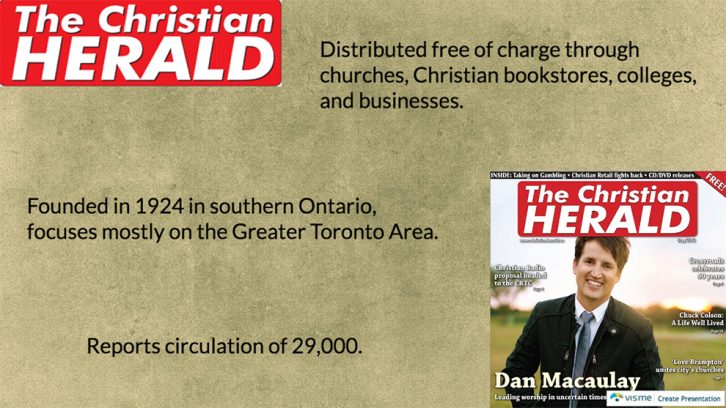 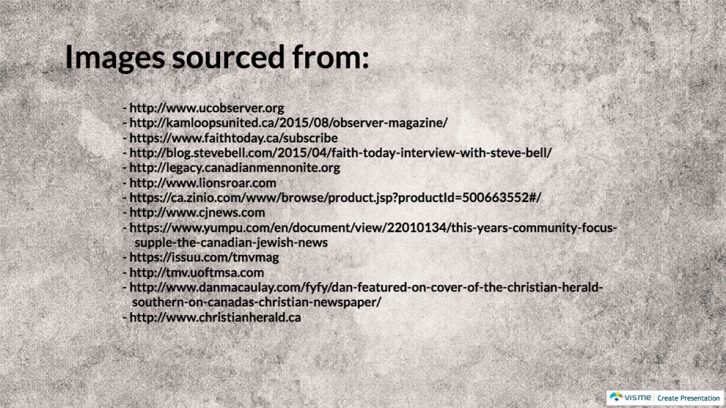 Correction: Editor's note: The Geez office is located not in north Winnipeg, but in the city's downtown. (Correction made Jan. 10, 2017.)