Down, but not out of the picture

Despite newsroom layoffs, great photojournalism can still be seen. Here’s why.

When Canon Inc. announced one of its higher-end cameras in 2013, the advertising campaign sought to catch the attention of amateur photographers. Nearly every advertisement and product description had two recurring elements. The first was crisp images of the camera. The second was a slogan that read: “Revoke your amateur status and step up to the Canon EOS 70D.” The message was simple: buy this camera and consider yourself a professional.

The language in most camera advertisements today suggests that, with the technology available, any person with the right camera can take an extraordinary picture – even if that camera is on a smartphone. This notion has contributed to newsrooms laying off entire photography departments, pushing photojournalists out of staff positions and into freelancing.

Some of Sara Quinn’s work at the Poynter Institute for Media Studies show that, in a newsroom without photographers, something valuable is lost. With the help of eye-tracking technology, Quinn has conducted research on how people read stories and look at photographs across media platforms. In 2014 she was contacted by the (U.S.) National Press Photographers Association and asked to conduct a study that would explore the ways people look at photographs.

The study used 200 photographs. Half of them were taken by professionals and the other half were submitted by members of the public. Quinn got 52 people to look at the photographs in random order. The whole time, an infrared beam locked onto their pupils tracked where they looked.

After recording all the subjects’ impressions, Quinn watched the eye tracker’s recordings at quarter speed, following and documenting each eye movement. The endeavour took her hundreds of hours and the results leave no doubt in her mind: the participants could tell, 90 per cent of the time, whether the photo was taken by a professional.

Quinn says “it was very clear that people recognized and appreciated quality. They were able to very clearly discern what was a professional quality of photojournalism versus what was user-generated.”

The people in the study not only recognized quality but could articulate why it mattered to them. And Quinn says it does matter. Recalling one of the comments made on a professional image, Quinn says “it’s not that that photo is so remarkable, it’s that somebody understood that it was important to see it. That’s exactly what photojournalism is.”

Quinn and the Association had been talking about the study months before the study began. Its increasing relevance was made clear after the Chicago Sun-Times laid off all 28 members of its photojournalism staff in 2013. For all production of photo and video content to accompany stories, the paper decided to rely on its reporters.

The image quality expected from smartphones is now at a point where smartphone photos appear alongside professional photos in large and small newspapers alike. Apple Inc. raised the standard when it announced at a keynote event in September its latest phone, the iPhone 7 Plus. Equipped with two lenses (one wide-angle lens and a second lens that zooms in twice as much), this phone camera’s versatility moves it closer to that of professional-grade cameras.

With such advancements in phone camera technology, Quinn defends the worth of the professionals creating the images rather than the tools. “There is a real value to knowing not only how to use the camera but how to understand the whole context, take a quality photograph,” she says, “just because someone has a camera doesn’t make them a great photographer.”

John Lehmann, a freelance photojournalist based in Vancouver, agrees that producing outstanding pictures has little to do with gear and more to do with the person using it. “It doesn’t matter what you use, it’s the content that’s the most important at the end of the day. If the content’s good, it doesn’t matter what device you use to capture it.” Lehmann was named Canadian photojournalist of the year by the Canadian Association of Journalists in 2012, 2013, and 2014. He has used both his smartphone and cameras to create his images.

Coincidentally, Canon Inc. released a video in 2015 to support Quinn and Lehmann’s sentiments. Titled The Obsession Experiment, it also used eye-tracking technology to explore the difference in peoples’ attention to detail. It involved three people examining the same printed photograph. One person was a non-photographer, one was a photography student, and the last was the professional photographer who shot the photograph. The number of times their eyes moved was recorded. The non-photographer had 212 eye movements, the student had 445, and the professional had 1,197. Amber Bracken, president of the News Photographers Association of Canada, thinks this obsessive attention to detail is a vital skill only professional photographers possess.

“I think our value is in our ability to curate the stories around us, and to focus on what’s most important when we share those details,” says Bracken. “That takes focus and it’s really difficult to do when you’re pulled apart into eight different directions doing multiple things at once.”

Regardless of the skill gap in photography between photojournalists and reporters, newsrooms must still make ends meet if their revenue goes down. Most times, this means combining the photojournalist’s responsibilities with that of the reporter, creating the multimedia reporter. But even if training is put in place for this new breed of reporters, Mark Tunney does not think it can compare. “Reporters do try their best but they’re limited by the technology they have. Their priorities are getting the story right and not finding the perfect photograph,” says Tunney. “They’re not really trained for that, for the most part. Some do a decent job but I think you’re not going to see the excellence that we once expected from newspaper photographers.”

Tunney is a journalism professor at St. Thomas University. He witnessed Brunswick News Inc. lay off all six photographers under the three newspapers owned by the company. “Newspapers without the use of professional photographers, they’re not going to be as good,” says Tunney, “and you do notice a difference.”

Halifax Metro is an example of a newspaper that relies on its reporters to produce photo content. Zane Woodford is a multimedia reporter who works for Metro Halifax. In addition to writing stories, he regularly produces the accompanying photos – not with a phone, but his own camera.

“Technically, we all shoot photos and we all write, so I guess those lines are kind of blurred for us,” Woodford says. “I think all young journalists need to learn to adapt. You know, we can’t be one-trick ponies anymore, it’s just not going to work. Everybody needs to learn to do more than one thing at this point.”

Metro reporters produce most of the photo content – but not all of it. Jeff Harper is one of only two staff photographers for Metro across Canada. He works in Halifax; the other staff photographer is based in Toronto. Woodford is grateful for Harper’s presence in the newsroom. “We have so much to learn from people who have done that one thing for so long, and have done it really well. I’ve learned a lot just watching how people – like Jeff – work at an assignment.”

Moe Doiron, the photo editor of the Globe and Mail, says reporters producing images is not the norm in larger papers; freelance photographers are the go-to, with staff photographer numbers diminishing.

The cost of photojournalism: a look inside Christian Laforce’s gear bag 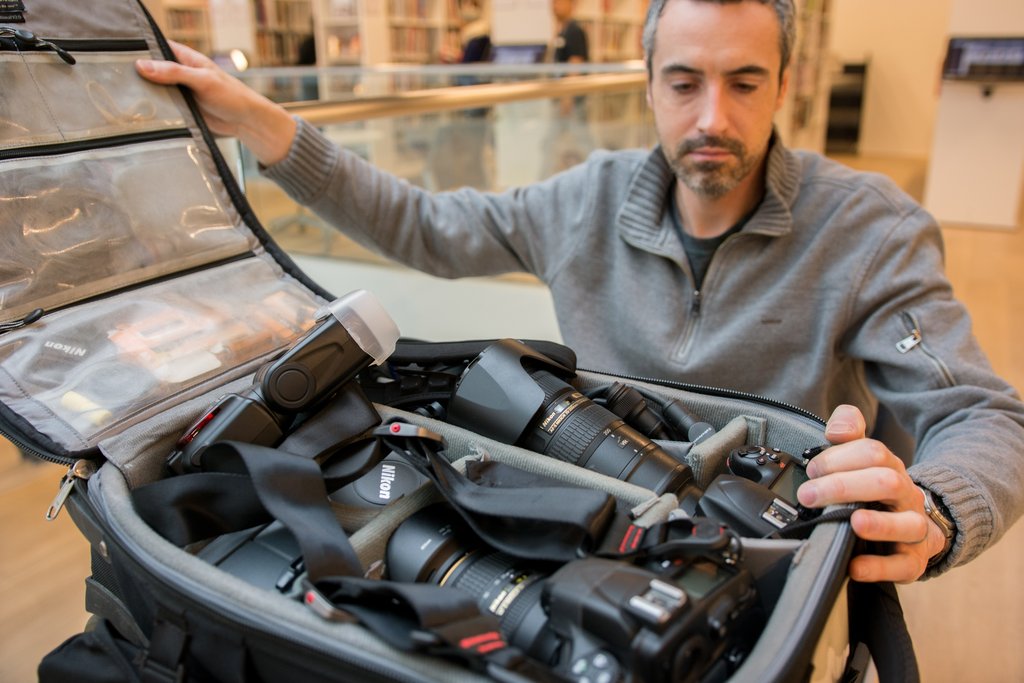 Amber Bracken is one such freelancer. She was laid off from the Edmonton Sun in 2014 – and welcomed the change. “It wasn’t a bad thing, it was really good timing for me to be laid off. I was really ready to be a freelancer,” says Bracken. Two years later, she is the president of the News Photographers Association of Canada, and has hopes for the future. “It’s a complicated time,” Bracken says. “I don’t think there are easy answers and I’m not blindly optimistic, but I’m also not giving up yet.”

“I think if you ask most people who do this for a living, they would do it for half,” says Doiron. “We didn’t choose this profession to make a lot of money.”