Examining the role of hockey players in sports media

It’s an early October morning in Seattle. The repeating blare of an iPhone alarm clock shakes 32-year-old JT Brown from a long night’s rest. Today is game day. The NHL pre-season is nearing its end and 32 teams are finalizing rosters for the upcoming season.

After slipping into a baby blue suit from his bedroom closet, Brown makes his way to the rink for a morning pre-game skate. This routine began after first cracking a NHL lineup in 2011 with the Tampa Bay Lightning.

Today’s trip to the rink is unlike the others. For tonight’s game, Brown won’t be requiring any hockey gear. Instead, he has swapped the bench for a broadcast booth.

Although he has played in front of crowds as large as 17,000 during his hockey career, Brown faces a new challenge.

“When the red light comes on and you’re in front of a camera and in front of the world, that’s when I get nervous because it is all new to me,” he says.

After playing in 365 NHL games, Brown was offered a position as the first TV colour analyst for the Seattle Kraken’s inaugural season in 2021. The former right-winger’s role now consists of offering in-depth analysis, background information on players, plays and in-game strategies to viewers during live broadcasts.

Brown took a ‘Broadcasting 101’ course the night before auditioning — while playing in Sweden — and scored the job.

Allison Smith, assistant professor of sport leadership and administration at the University of Massachusetts Boston, says athletes are continuing to turn to sports broadcasting following the end of their professional playing careers for many reasons.

“They have a real athlete mentality, which means being resilient in the face of a lot of obstacles,” Smith says. “Things like teamwork and time management, they were already well-experienced in those types of things.”

Smith’s 2021 research suggests working in sports media helps athletes feel relevant when their time in the pro-sports spotlight has dimmed. During their playing career, athletes gain a sense of self-belonging while partaking in “in-group memberships,” adapting an “overall group identity” with peers.

When they’re removed from this environment, athletes begin to have difficulty coping with their sense of self-worth, Smith says. Transitioning into sports media allows them to remain in their comfort zone without ever having to lace up their skates again.

Where does that leave trained journalists?

A Communication & Sport study published in 2014 asked a group of newspaper sports editors and TV sport directors to identify the most highly desired skills. Both ranked writing ability as most important. TV sports directors then valued video skills, on-air ability, anchoring skills and meeting deadlines. Sports knowledge was 10th on the list.

Sportsnet national reporter Arash Madani has been with the network since 2009. He “wasn’t that good” at sports growing up in Truro, N.S. In high school, Madani realized he “wasn’t gonna be the next Roger Federer or the next Magic Johnson.”

Luckily, being an athlete isn’t a prerequisite for sports reporting — storytelling is. “You have news reporters covering a war who have never been a soldier before,” Madani says. Journalists covering the White House or Parliament Hill “have never been president or prime minister before.”

The primary person in a sportscast should be a broadcaster, he says, adding a former athlete or coach will complement the show. “Jim Nantz never put on a green jacket or lifted the Super Bowl trophy but what he can do is work with somebody who’s done both of those things,” Madani says. “And set them up and elevate them.”

Pro-athletes-turned-broadcasters are essentially rookies, “starting at scratch” in television, while Madani already knows the ‘ins and outs’ of the business.

He doesn’t think former players are taking jobs from trained journalists because the roles they fill are “two totally different gigs.” Athletes are more commonly looked to for analysis. Modern-day broadcast booths and studio analyst panels are continuing to be filled with familiar faces from yesterday’s NHL.

“They give inside knowledge that even a professionally-trained commentator wouldn’t have,” says Dan Berlin, ​​assistant professor of sport media at Toronto Metropolitan University. His resume includes Sportsnet, Yahoo Sports and radio for TSN and CBC. As former athletes who have “played at the highest level, you have an insight into your sport that has currency and value to networks and to viewers,” he says. “The selling point is how you translate that into developing a personality on-air that can relate to your audience.”

Digital media such as Youtube and Apple Podcasts are giving hockey players a clear path to fans. Berlin has noticed the shift allowing athletes to connect with their own audience and demographics.

Former NHL players Paul Bissonnette and Ryan Whitney have grown their brand and online fanship, with Barstool Sports writer Brian McGonagle and producer Mike Grinnell, after launching the Spittin’ Chiclets podcast in October 2016. ​​”We’re not extremely polished, we’re very opinionated, we’re a little vulgar, we talk about stuff some people wouldn’t be down with, but all in all we’re having a good time,” Bissonnette told CBC in 2020. ​​

A year prior, legendary defenseman Chris Chelios dished about fired Toronto Maple Leafs coach Mike Babcock on the podcast instead of legacy media. Spittin’ Chiclets has 245,000 Youtube subscribers and is often the top hockey-related program in the U.S. and Canada on Apple Podcasts.

Bissonnette, who only played in 202 NHL games, is now a prominent figure in hockey media. He even shares a panel alongside studio analyst Wayne Gretzky on the NHL on TNT broadcast. WarnerMedia’s Turner Sports announced inking a $1.6 billion, seven-year multimedia rights agreement with the NHL in April 2021. “For Craig Barry, the executive vice president and chief content officer for Turner Sports, the network’s first priority is not necessarily growing the audience,” sports reporter Jonathan Abrams wrote for the New York Times. “They know the devoted hockey fan will tune in.”

A Deloitte report on “Engaging sports fans year round” was released as part of its 2021 outlook for the U.S. sports industry. It finds NHL fans “have the highest preference of any league for using team-managed websites as their primary source for following their favorite teams.” MLB fans, though, turn to newspapers, radio and traditional outlets the most.

Johnny Gaudreau signed with the Columbus Blue Jackets following nine seasons with the Calgary Flames. He penned a letter to fans in July 2022 saying goodbye. Once again, legacy media had no choice but to mention it. Gaudreau’s medium of choice? A disruptive ‘new media’ site called The Players’ Tribune.

“Things changed when athletes realized they didn’t need to sit down with a reporter and share their story,” says TMU professor Dan Berlin.

Founded by baseball great Derek Jeter in 2014, the Tribune markets itself as “The voice of the game.” It features mostly text stories and video prominently covering the big five sports: basketball, football, soccer, hockey and baseball. The site operates as a vehicle for players to shape their first-person narratives. Stories are ghostwritten and copy is approved by athletes, who also decide whether to kill a story.

“Effectively, The Players’ Tribune has found a way to simulate the access of olden times by putting control in the hands of the wealthy and attractive subjects,” Amos Barshad wrote for the New York Times Magazine in 2018.

Theoretically, Barshad continued, the Tribune’s platform “is replicable for any public professional.” People can air their “own particular worldview, free of objectivity, on a bespoke, partisan media organ, with slick photography and design. And it will be up to us to decide what version of the truth we want to believe.”

Athletes have something in common with spin doctors. “People working in public relations no longer need journalists as much. They have been able to use the internet and social media much more extensively and profitably than we have,” stated senior research fellow John Lloyd,​​ co-founder of the Reuters Institute for the Study of Journalism at the University of Oxford, during a 2014 seminar.

Where do sport-specific magazines fit in? Players have contributed occasional columns or guest-edited pieces for The Hockey News, based in Toronto. Those pieces are approved by the athlete before publication, much like the Tribune. Their input brings credibility to the table and “the athletes can give that inside firsthand perspective, which is pretty invaluable,” says features editor Sam McCaig.

Athletes have plenty of exposure to microphones and it makes sense for them to turn to broadcasting since they know all about speaking in sound bytes during arena scrums and press conferences. In terms of former players fully transitioning into print media, “I am not sure if it is as easy to put all of your thoughts and experience onto paper,” he says.

Athlete vs Journalist by Brad Chandler 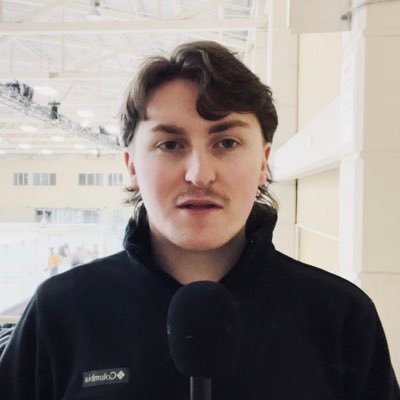