The art of reporting tragedy

It’s difficult, but when done well can empower

Dialing the phone Jana Pruden had a sick feeling in her stomach. It was the feeling the reporter gets every time she calls a family member after a death. A man answered. She began her usual introduction, expressing her condolences and asking if she could tell his daughter’s story, with his help.

He answered, not with swear words or anger, but by simply telling her to “come over.”

Pruden got up immediately from her desk and headed to the family’s house. Tears were shed by all, but the family wanted people to know more of their loved one than her murder—and Pruden wanted to help.

The last 15 of Pruden’s 20 years as a reporter has focused on crime. Based in Edmonton, she currently works for the Globe and Mail. She is also the co-author of two compilations of true crime stories. Pruden now mainly focuses on features, but also has experience with breaking news. She has interviewed people for both types of stories and says there are differences.

It’s important to contact families after a tragedy to provide a voice telling their story, but it’s not an easy task. It can be daunting. The family may be eager to talk, or may be disgusted by the call.

Imagine a car full of teenagers killed in a horrible crash. It’s shocking news, and the public wants more information. Who were these people? What were they like? The responsibility of gathering that information falls to the journalist. The issue is how to gather it without further traumatizing anyone. There are different ways journalists handle it: some work, some don’t. It’s complicated.

Not everyone feels the same sense of pride that Pruden does. Kevin Cox, a former Globe and Mail reporter, left his full-time job because of the guilt from doing what he calls the “death knock”. The “death knock” is a term used when journalists contact the family after a death happens. Cox is now a minister with the United Church and a non-crime related column writer for AllNovaScotia.com.

He spent 23 years at the Globe and Mail, and believes he excelled at talking to grieving people. He always thought, “better me than someone else.”

Still, it was work he couldn’t justify any longer. Decisions he made are now regretful memories, but he says they have helped to form his current view. He believes the sacredness of the grieving process is more important than the public’s right to know.

Journalists respect the grief a person is going through, but not to the degree Cox believes is necessary. Deadlines, competition, and pressure, he says, make it difficult to stop—to take a moment—and evaluate the situation. Many bad ethical decisions, he says, are made because of the tight turnaround required for news stories. Especially with 24-hour news.

An ethics code is a document that almost every news organization has. There is always some variance in protocols, rules and styles. Six of the continent’s biggest news organizations—CBC, the Toronto Star, the Globe and Mail, the Washington Post, the New York Times and the Chicago Tribune—vary greatly when it comes to reporting a tragedy.

Every ethics code has its own strengths and weaknesses. The Tribune’s code is not particularly long or comprehensive, but on this issue is strong.

One thing most codes do not address is how to first contact someone after a tragedy. Media ethicist Stephen J.A. Ward, now living in Fredericton, New Brunswick, has written numerous books on journalism ethics. He also has taught students how to analyze a situation with ethics in mind.

Some ethical practices seem like common sense, but they aren’t always easy to follow. He says approaching “gently” is a good way to start. This means a human being making contact with another human being. Not a swarm of video cameras, lights and recorders. Making a human connection will help put the subject at ease. It seems obvious, but it can be easily forgotten when a deadline is approaching quickly.

Another way Ward suggests getting in contact is through a family spokesperson–if there is one–or a relative, leaving a card and letting the person reach out. This gives the person the space they may require to feel comfortable sharing their story.

Each person a journalist contacts may react differently: slam a door in their face, break down in tears, or welcome the chance to speak about a loved one. A journalist needs to be prepared for every possible scenario.

The tricky part starts after the relationship is established. It’s not enough to just be nice.

Asking specific questions to elicit facts and understand certain events is the best way to minimize harm, says Ward. The worst mistake is asking someone to relive what happened. “In reliving, you are retraumatizing them.”

Journalism students are taught ethical principles, but may not take away how to actually follow them. In all of the principles, compassion is key. Journalists peer into people’s lives, briefly, to tell a story. It’s not the same as feeling the way these people are hurting.

Ivor Shapiro, an ethics professor at Ryerson, starts with this advice: “don’t be a jerk.”

Shapiro, who has a master’s degree in ethics, says many ethical questions come down to understanding humility. Journalists are human, and need to recognize the vulnerability of being human.

People also make mistakes. No matter what conclusion a journalist reaches, he says, there is a good chance someone will be unhappy with it. And it may be the wrong call. 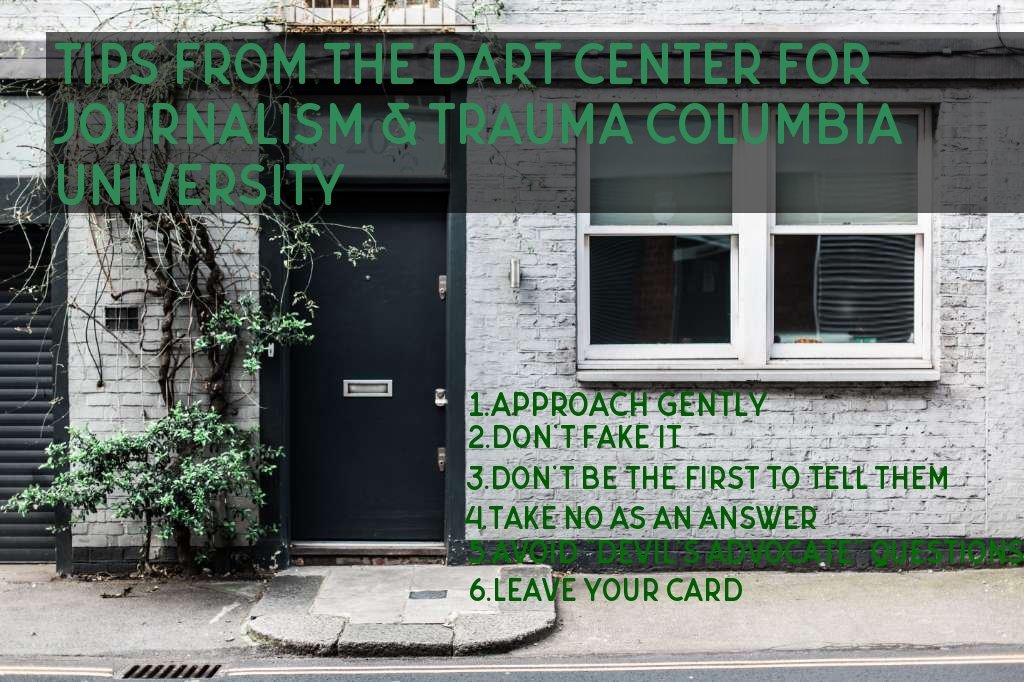 Dr. Amber Fougere, a Halifax psychologist at Lesley Hartman & Associates Inc, works with people who experience mental illness due to trauma. This includes the general population, RCMP officers, and veterans. Fougere says there are three responses that people go through during a trauma: flight, fight, or freeze.

Fight and flight are commonly known; either the person attacks the threat or flees from it. Freeze is less known, but has been studied increasingly since 2004 when the article Does “Fight or Flight” Need Updating? was published in the medical journal Psychosomatics. (The article was written by H. Stefan Bracha of the (U.S.) National Center for PTSD, Department of Veterans Affairs, in Honolulu, and several colleagues.) Freeze is when a person responds with shock and feels removed or dissociated from the situation. Fougere says this response can last longer than the traumatic event.

Every person is different.

No definitive way of approaching or interviewing will work for everyone, but there are road signs to watch for when navigating who to interview and what to say.

Fougere says walking into the situation with “trauma-informed lenses” will help a reporter make an ethical decision. She also says to look for when a subject doesn’t seem engaged. When they are not fully present they can’t decide how to answer a question—or if they even want to. You want their consent.

Meghan Grant, a crime reporter for CBC Calgary, says it’s part of her job to act as a filter when grieving people talk. It’s most likely the worst day of their life, she says, and “you don’t want to exploit that grief.”

Grief is a five-letter word all crime reporters become familiar with. They can’t steer away from it. Whether a person wants to talk is not the journalist’s decision.

Edmonton feature writer Pruden frequently talks at a victims of homicide family support group. She says sometimes it can be more hurtful when a journalist does not contact a family. She was approached by a lady at the group whose daughter was killed in the ’80s. It wasn’t a case she had worked, but what the mother had to say affected her just the same.

This, she suggested, was the result of uninformed crime reporting.