The uncertainty of memory poses a challenge for narrative journalists

When David Hayes was 10 or 11 years old he saw light coming from an unexpected room in his parents’ home. This was unusual—it was 6 a.m.; he was up to do his paper route.

At the time, his middle sister was sick with ulcerative colitis, a troublesome lower intestinal disease. He walked along the hallway to the bedroom where his sister was staying. He saw her bed; she wasn’t in it. The sheets were covered in blood.

His mother told him not to worry, to go do his paper route, Salli would be fine. As he rode away on his bicycle, an ambulance drove down the street, toward his family’s home.

Hayes has made his living with words for more than 30 years, writing nonfiction books and longform narrative journalism for publications including Toronto Life, the Walrus and Chatelaine. And that childhood memory shaped the way he thinks about his work.

Narrative journalists are artists of time, recreating scenes that may have happened years ago. They spend hours, weeks and months with the people they write about, asking big questions and many little ones: what did that feel like? what colour was the car? who arrived next?

Memory is essential to narrative journalists, but the memories they work with are malleable and fallible. Studies show that memory is inconsistent, and even life’s most dramatic moments—a sister gone, blood, an ambulance—can be false, or fade and alter as time passes. Hayes recognizes that his was a false memory.

How, then, can narrative journalists build true stories from memories that unintentionally deceive?

The sea of memory studies

Ideas about the nature of memory go back to Aristotle, who compared memory to making impressions in wax. In 1885, a German philosopher named Herman Ebbinghaus took that wax and quantified it. He was first to experiment with memory, the father of memory science.

Richard Brown, a professor of psychology at Dalhousie University in Halifax, guesses that two million memory studies have been done since Ebbinghaus’ time. Brown teaches a course on the neurobiology of learning and memory. When he explains memory, he’s incapable of dumbing it down, unable to prevent himself from slipping into a dialect of synapses, neurons and systems.

Both his offices at Dalhousie are piled with inconceivable stacks of papers, many to do with memory. He moves among them with much muttering, pulling out “simpler” studies, whose titles still read like a foreign language. He can’t even pinpoint how many types of memory there are, because “it all depends how you think of things.” 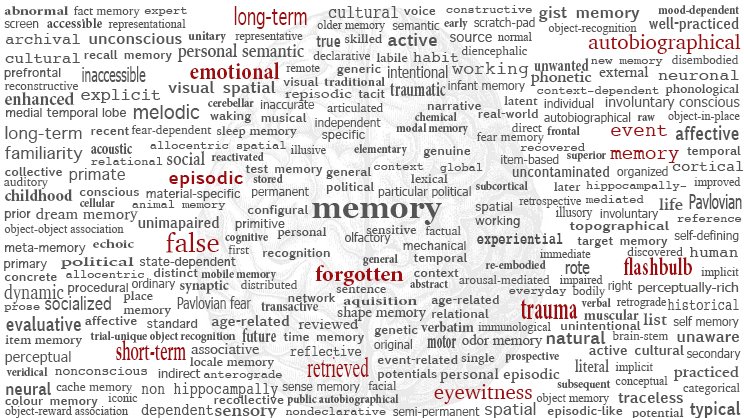 In the sea of memory studies, two problems should stand out to narrative journalists: forgetting, and false memories.

People forget crazy things. In a 2015 study published in the Journal of Experimental Psychology, professors of psychology William Hirst, from New York’s New School, and Elizabeth Phelps, from New York University, surveyed people’s memories of 9/11. They spoke with people across the U.S. a week, 11 months, two years and 10 years after the attack. They asked people to recall “event memories,” like how many planes were hijacked, and “flashbulb memories,” like how they felt and where they were when they learned the twin towers had fallen.

They found that memories changed and facts were forgotten, though those surveyed were confident they recalled everything “correctly.”

When Roy Peter Clark wrote Three Little Words, a serial narrative in the St. Petersburg Times, about a family whose father died of AIDS in 1993, memory was crucial. The piece was published in 1996, and Clark, now senior scholar emeritus at the Poynter Institute for Media Studies in St. Petersburg, spent hundreds of hours over two years interviewing the Morse family. He reconstructed scenes from their typical middle-class American past: Jane and Mick’s wedding night, their son’s high school graduation, the day Jane found out her husband Mick was going to die.

Having just learned of Mick’s disease, Jane sits in her car. She’s gasping for breath and fighting off revulsion. Those feelings bring the scene to life.

But years separate that moment from Clark’s reporting on it. In a 2009 article in Applied Cognitive Psychology, psychology and social behaviour professor Linda Levine, of the University of California Irvine, shows that when people try to remember emotions attached to specific events, they can’t. Instead, they recreate their feelings, using memories of what happened and how they feel about it now.

So sources reconstruct emotions that journalists use to reconstruct scenes, now twice removed from the original rage, sorrow or joy.

Forgetting is one thing; false memories are another. They can come from leading questions, remembering news stories as if they’re personal experiences, or can just drop from the sky.

Elizabeth Loftus is the world’s most prominent false memory researcher. She’s a professor of criminology, law and society, and psychology and social behaviour at the University of California Irvine. In a 2013 TED talk she described her work. She’s planted false memories in study participants; she’s observed how a question’s wording alters what people remember.

Loftus’ work has changed her. Most people cherish their memories, she says in the talk, in Edinburgh. They believe their memories make them who they are—not knowing, as Loftus does, that memory is dynamic and tainted with fiction.

Memory distortions are common knowledge in law, psychology, history, sociology and anthropology. They are equally relevant in journalism.

Narrative journalists aren’t looking for absolute truths; they are out to deliver experience. They write about the drama of life—and in “the drama of life there are things that are true and untrue,” says Sims.

For John DeMont, a columnist at The Chronicle Herald in Halifax and the author of five nonfiction books about Nova Scotia, getting close to truth means visiting places people describe to him. Sometimes, he finds their memories are wrong.

“That becomes part of the story,” he says. “The story of the writer trying to find out what’s going on.”

A piece of narrative journalism is really two stories: in one, action unfolds and characters develop. In the other, the journalist wrestles with how to write what they can’t know.

The transparency of that struggle is critical. It’s what separates narrative journalism from essay writing or memoir. Transparency is the journalist breaking into the narrative, to pick the reader up out of the action, just for a moment, and warn them that a memory may be flawed.

Attribution works as a warning sign—“she remembers it this way,” or “he’s unsure, but it probably went like this.” Attribution allows journalists to slightly sidestep responsibility for memories that aren’t unfailingly accurate.

Author’s notes, or “notes on sources,” are another way for narrative journalists to show how they know what they know, or don’t know.

Notes, sometimes spanning more than 30 pages, offer insight into how narrative journalists decide which fragile memories to include, even if they can’t be fully verified. In the author’s note from Behind the Beautiful Forevers, Katherine Boo’s nonfiction book about a Mumbai slum, the reader learns that Boo was physically there for almost every occurrence in the 244-page saga. Others, she reported shortly after they happened. One event was reconstructed by interviewing 168 people about their memories.

Transparency builds trust. Narrative journalists want readers to suspend disbelief: to give up questioning every fact and every reported memory.

Trust comes from accuracy and style, says Sims. Through artful writing and literary techniques, narrative journalists create believable narrators that develop relationships with readers. The importance of language in building trust is why Sims prefers the term literary journalism, not narrative or creative nonfiction.

David Hayes, who falsely remembered his sister’s blood-covered sheets, when working on an article charts dramatic moments in a timeline. Those are ones he’ll reconstruct, because they’re the ones people remember vividly—though he knows vivid doesn’t equal accurate.

When he’s interviewing, he’s also evaluating his source. How much do they exaggerate? How many simple facts do they get wrong? Answers to those questions help him decide if he will trust their memories.

The building blocks of narrative journalism are scenes, sometimes reconstructed from memories. Scenes succeed by pulling readers into a story’s time, place and characters.

A persuasive scene evokes personal memories in readers. When readers surrender disbelief and get lost in a story, it’s memory that draws them in and keeps them there.