Too few journalists are informed of the mental health impacts they may face on the job. War correspondents have almost all taken hostile environment training, says the Globe and Mail’s Latin American Bureau Chief Stephanie Nolen, who has worked internationally for over two decades. This aims to prevent physical injuries in dangerous areas, but according to Nolen even hostile environment training has “zero mental health component.”

“Until somebody tries to kill you and it doesn’t work, there’s nothing anybody can say to you to describe what it feels like,” says Nolen. The risks for these journalists aren’t limited to physical injuries; some effects last long after a reporter returns to safety, and can’t be seen with the naked eye. Post-traumatic stress affects 29 per cent war correspondents, according to a study in the American Journal of Psychiatry by University of Toronto psychiatry professor Dr. Anthony Feinstein, This compares to five per cent of the general population and is more than double the 14 per cent of police officers diagnosed. Even those who don’t meet all the criteria for PTSD can be severely affected, and 77 per cent of war correspondents studied suffered unwanted flashbacks for months after their return. These flashbacks, which are commonly linked to PTSD, are a symptom of intrusion.

Intrusion is one of three parts of the PTSD triad. The others are arousal – for example increased irritability and trouble sleeping, and avoidance – which often manifests as detachment from other people. More than half of war correspondents are single or divorced, compared to only one-third of all journalists.

Feinstein found that PTSD rates in journalists are similar to the rates of soldiers on the front lines. But unlike soldiers and police officers, journalists are rarely prepared for the gruesome sights they may see while doing their job. One reason it’s especially hard for journalists is because the trauma they encounter is what they are paid to witness. “They find themselves caught in this trap: their body is saying ‘No I don’t want to do this’, but the newsroom is saying ‘You’ve got to do it’,” Feinstein says, “and that’s a problem.”

A culture of silence

Cliff Lonsdale, the co-founder and president at the Canadian Journalism Forum on Violence and Trauma and former Chief News Editor for CBC Television, agrees that the attitude of journalists surrounding mental health needs to change.

“When I started in journalism way back in the ’60s, you did not breathe a word,” he says. “If you were upset by seeing dead bodies or dying people in a car accident, you did not say anything in the newsroom, because you felt you would be looked down on and perhaps passed over for some assignments.”

Lonsdale thinks opinions around mental health have improved in the past 10 or 15 years, but still need improvements, like trauma training in journalism schools. “People have to learn about covering trauma and traumatic things, and the effect that it will have on them – before they get into the newsroom,” Lonsdale says.

In Feinstein’s study, 25 per cent of war correspondents received post-combat medication or therapy, compared with 16 per cent of all journalists. The high rates of PTSD and low rates of seeking help are linked to the stigma surrounding mental health that persists in the industry. “It’s not like in the military,” says Nolen, “where there might be PTSD Awareness Day where everybody is going to talk about it. It’s not a front and centre thing.”

Feinstein says mental health has always lagged behind physical health because people don’t see it as life-threatening. The culture of pushing reporters to their limits has been slow to change; only lately are journalists gaining courage to open up about their experiences.

Stephanie Nolen talks about her experiences as a foreign correspondent

In Canada, one organization that provides mental health first aid training is Saint John Ambulance. The course is similar to regular first aid: twelve hours over two days, $120 to register. However, instead of treating physical injuries, it focuses on reducing stigma and improving communication about mental health. Laurel Haché brought this training to Nova Scotia, the first province to offer it, in November 2014.

“In a workplace mental health can be as debilitating as a physical illness,” says Haché. The main focus of the training is listening non-judgmentally. The course covers everything from stigma to substance abuse to depression. At the end, participants know about resources available – or unfortunate lack of them. “Someone who is suffering from depression or anxiety or even psychosis is not someone to be afraid of,” Haché says. “It’s someone that we can help.”

Sebastian Junger is co-founder of an organization that works with journalists heading into combat areas. Reporters Instructed in Saving Colleagues (RISC) holds courses to instruct freelance journalists in lifesaving first aid. “We try to make it in areas near where these people are working, places that are inexpensive to work in and not too risky to get to,” says Junger. His New York based organization has held courses in London, Italy, Kosovo, Kenya, and the Ukraine. RISC training is four days long and participants pay travel plus a $100 deposit. The rest of the $1,000 fee is paid through donations from news media organizations.

“The industry really isn’t stepping up enough to fund it,” says Junger, “But they benefit from it because they get medically trained freelancers for free.” Junger estimates there are 2,000 freelance war correspondents worldwide. RISC trained 72 in 2015. Although RISC doesn’t focus on mental health, this model of providing low-cost training for freelancers could be applied elsewhere.

Journalists tend to cope in other ways rather than seeking professional help. Nolen and other colleagues dealt with the impact of what they were seeing the way most journalists do – at a pub. “The only other people that know (what you’re going through) are other reporters or the MSF doctors,” she says, “and those are the people that you’re going to get blind drunk with that night, and then you’re never going to talk about it again.”

On average, male war correspondents drink two times more than average – 15 drinks each week – and females three times more – 11 drinks. “That’s how we dealt with it,” says Lonsdale. This heavy drinking did not necessarily mean getting help though; only 14 per cent of journalists had been diagnosed with substance abuse. 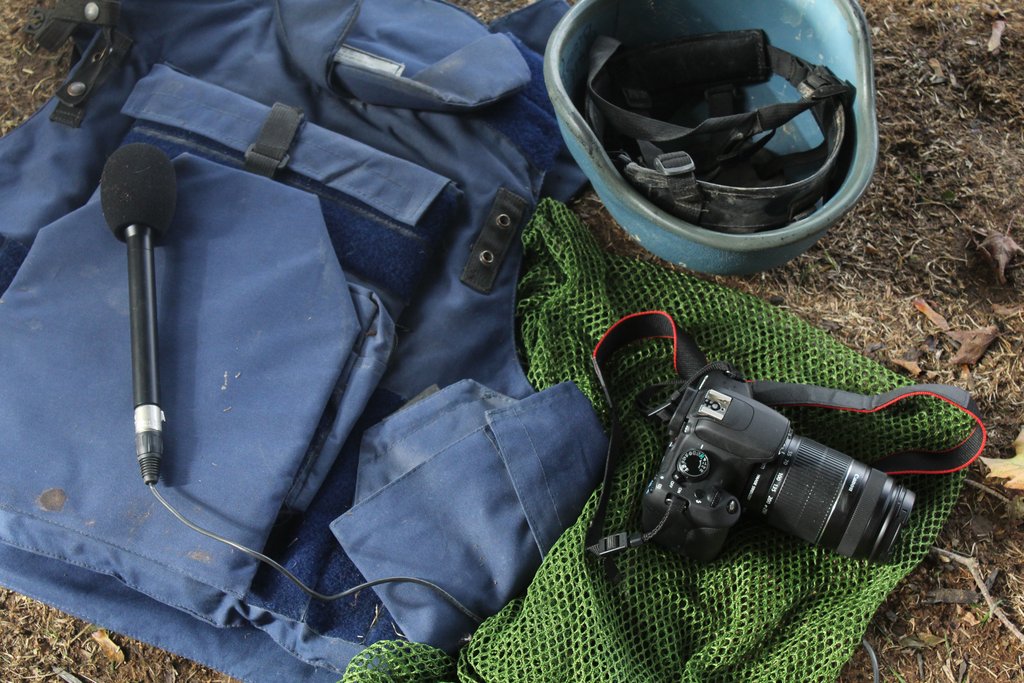 The stigma surrounding mental health is changing, but slowly. More journalists than ever are trained in physical first aid thanks to hostile environment training, according to Feinstein – but concern for war correspondents’ mental health is far less common than it should be. Feinstein says he consults with the New York Times, CNN, and the Globe and Mail’s foreign correspondents, but thinks all organizations have a moral imperative to help journalists that they send to war zones.

“Every news organization that asks journalists to do dangerous or potentially traumatic work should have something in place to help them,” he says. “You would not dream of not having treatment for a journalist who broke his leg, or one who broke her arm. It’s inconceivable that you would ignore that, so how can you ignore someone who’s been traumatized by their work?”

The coping mechanisms journalists use aren’t always effective, but Nolen understands why war correspondents – a group exposed to more violence in one week than most will see in a lifetime – aren’t seeking conventional therapy. “I don’t know if there’s a handy guide for surviving the kind of emotions that come with an assassination attempt, or a kidnapping, or even just a random scraping of your car with bullets,” says Nolen. “Nothing else really feels like that.”

What is evident is that the organizations providing resources are few. Although outreach has improved in the past decade, journalists need to start initiating conversations about mental health before they are exposed to trauma in the field. If future war correspondents start opening up about their mental health, perhaps the culture of training conflict reporters to be bulletproof and emotion-proof will end – and so will suffering in silence.