Why are we obsessed with podcasts?

What do you do when your acting career is going nowhere, you’re 28, and you’re terminally ill? Jeremie Saunders, of Halifax, Nova Scotia, decided to make a podcast.

Saunders has cystic fibrosis, a fatal genetic disorder that causes serious lung problems; there’s a slim chance he’ll make it past 50. He had focused on acting his whole life, but struggled to find work and happiness.

Last year Kevin Smith, a filmmaker and podcaster from New Jersey, came to Halifax to screen a new film. Afterwards he hosted a Q&A session. Smith talked about podcasting and said anyone can make a podcast – if you have an iPhone and a passion. Saunders, in the audience, instantly knew he wanted to quit acting and make a podcast.

“I had this rush of inspiration in that moment,” Saunders says, in the dimly-lit sound studio where he spends a great deal of time. “Like, wow, I can do that! I’ve got an iPhone. I know a lot about being sick, and I find it really interesting to talk about. So I could do a podcast where I talk about what it’s like to be sick, and call it Sickboy.”

Now, a year later, Saunders and two friends, Brian Stever and Taylor MacGillivary, sit in their studio – a room in the basement of Brian’s mom’s townhouse in Dartmouth – to host and record Sickboy.

Their podcast aims to break down the stigma associated with disease and illness – with laughter. Every week the three hosts meet with a guest, who struggles with his or her own illness, and make light of sometime dark situations.

Saunders, despite his illness, is full of enthusiasm: for his podcast, for his friends, and for life. He radiates energy, and sometimes that bubbles over with a liberal use of profanity. (Some f-bombs have been removed by the Signal editor’s sword.)

According to the 2016 Podcast Consumer Report, conducted by Edison Research of New Jersey, in 2006 only 22 percent of Americans 12 and older knew what podcasting was. Now, more than half the population are familiar with the term. Edison, which has been tracking the growth of podcasts for 10 years, estimates 98 million Americans have listened to a podcast at least once.

Think of Netflix, but for radio – and without a $9 monthly subscription fee. Podcasts are free, portable, and on-demand. They offer an intimate session between host and listener – often played through headphones to right in between your ears.

Good podcasts feature sharp dialogue, clear audio and, usually, a strong narrative that captivates listeners – the same way radio dramas did 80 years ago. Radio dramas caught on in the 1920s and were popular all over the world. With the invention of television in the ’50s radio dramas lost their audience. In the last 10 years, they found a new stage: podcasts.

Edison Research vice-president of strategy and marketing Tom Webster says, “those muscles for spoken word content creation have not been exercised in a long time. We’ll have to develop those muscles again, because a lot of commercial radio in the world have simply forgotten – or never known – how to do those things.”

Podcast Playlist is a weekly national radio show that samples the best of what’s available in the podcast world. Broverman said podcasts turn your brain on because “your other senses aren’t just being spoon-fed,” like in television. “A really good piece of audio pulls you into another world.”

But not all audio is good audio. And just because you have the resources doesn’t mean people will listen. There are 16 genres, and more than 300,000 podcasts in the iTunes store, making competition steep.

Webster feels “the bar is much, much higher for someone to spend 30 minutes listening to a piece of information, than just skimming it in two or three minutes.”

We’re in a digital world where audio can be searched, downloaded and played within seconds. Quality spoken word content is growing beyond niche, but it takes persistence, skill, and passion to make a podcast people will listen to.

“A good story is like magic,” Broverman said. “It’s irresistible, however it’s told.”

In 2000 Dave Winer, a New York software developer, created an RSS feed that could include audio. Previously feeds had been text-only.

RSS (Really Simple Syndication) is a web feed format that automatically updates content from blogs, online news sources, and audio and video to your computer or mobile device. Think of subscribing to a magazine: you do it once, and from that point on the magazine will come to your doorstep regularly, without you having to re-order it.

In 2003 Winer was interviewed by Christopher Lydon, a Boston journalist and blogger, for his blog Radio Open Source. At the time Lydon was audioblogging: uploading interview clips with MP3 files. The recorded interview of Winer was released to Lydon’s blog using the special RSS feed, so readers didn’t have to manually download it. This was the start of podcasting.

In 2004, the word “podcasting” made its debut in an article written by Ben Hammersley for the Guardian. Within a year, there were already 8,000 podcasts available. Apple introduced a podcast directory to the iTunes store, and Steve Jobs predicted podcasts would be the next generation of radio.

In 2006 the (U.S.) National Public Radio show This American Life was first offered as a podcast. More than two million people tune into the radio show each week. Now it’s the most popular podcast in the U.S., with more than 2.4 million weekly downloads.

In 2014 This American Life launched Serial, a spin-off podcast series that tells one non-fiction story over one season. In its first month Serial surpassed one million downloads per episode – something that This American Life took four years to achieve. The success of Serial marks when podcasting exploded.

The same year Serial went viral, Apple released a native podcast app. Now, podcasts can be subscribed to, downloaded and played within seconds, right on your iPhone. 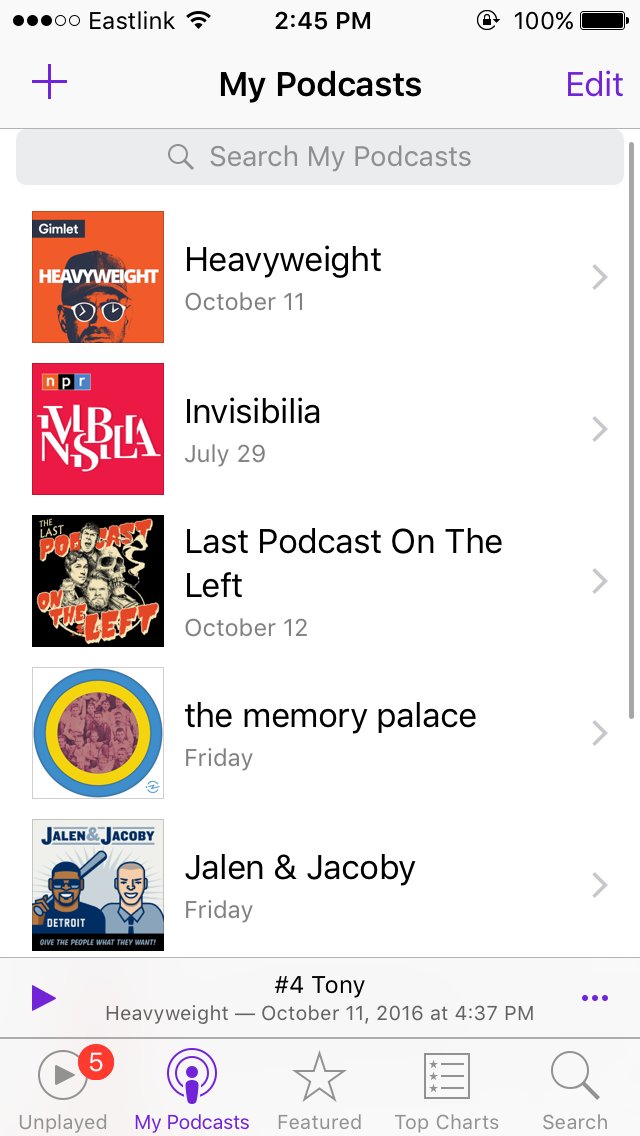 The voices in your head are real

After listening to a podcast for a few weeks, you might begin to wonder whose face is behind the voice. A host is reliable, entertaining and you feel a relationship has been established. Seeing a face may seem like the next step to take.

The best of Canadian and American podcasts were live on stage – for the first time, focusing on non-fiction – at a three-day festival at the Hot Docs Ted Rogers Cinema in Toronto Nov. 18-20. Festival programming manager Alan Black said “the idea of seeing these people do their thing live is kind of, almost like a weird, transcendent experience.”

Live events are just one-way podcasters build a stronger relationship with listeners; it’s also one way they make money. Podcasts are still a blooming medium and they’re changing the face of advertising.

Advertisements in podcasts are presented differently than in other media; the host reads a script, making ads personal and effective. Advertisements are the main source of income for podcasters.

Midroll, a California company that hosts more than 200 podcasts and matches them with advertisers, explains on its site that “podcast ads are priced on a cost-per-thousand download model, or CPM.” For example a $25 CPM, for a 30-second slot, on a show that has 10,000 downloads, would cost the advertiser $250. Podcast CPM rates can range between $25-$100, which is two or three times higher than AM/FM radio.

But money can change things. “I’m worried about the monetization of podcasting,” says Merlyna Lim, an assistant professor in the school of Journalism and Communication at Carleton University. She’s worried that corporations will “capitalize on opportunities” and “change the landscape” of podcasting.

“Some radio stations now look at podcasts as a way to gain profit,” Lim said. She notes that when you download one, you’re likely going to download a second and third. It’s this addictive nature of podcasts that has corporations eyeing the opportunity to make money.

The three young men from Halifax aren’t too worried about the money their podcast makes, or how many people listen to it. Sickboy allows them to build a community, through meeting people and telling their stories.

Podcasting has opened the door of possibility. Saunders, MacGillivary and Stever feel that Sickboy could be an international success.

“I don’t think it’s that crazy to think that we could get to that point,” Saunders said, laughing. “But if we don’t, who gives a shit?”