Roger Lewis watches his grandfather in a film on exhibit in the Nova Scotia Museum of Natural History. For Lewis, the history of his people, the Mi’kmaq, is part of his life every day.   Paul Robinson

Media misconceptions of the past can affect today’s aboriginal communities

Derelict cars and old refrigerators stood in a field scarred by ATV joyriders.

Well into the ’90s, that’s all you could see at the oldest dated archeological site in Canada – even after it had been excavated in the 1960s and made a National Historic Site in 1972.

An ancestral place for the Mi’kmaq, the Debert site near Truro, Nova Scotia, was being ravaged one ATV ride at a time. It wasn’t easy for the Mi’kmaq Nation to reclaim.

The Mi’kmaq taking ownership of Debert is a story of people standing up and saying, “This is our homeland and we care about what’s here and we want to protect it,” says archeologist Leah Rosenmeier, research specialist for the Confederacy of Mainland Mi’kmaq. The Confederacy is a tribal council that became a non-profit organization in 1986; its mission is to promote Mi’kmaq communities. “This organization really put its money where its mouth was … to say ‘No. We want to see these places protected.’”

That’s not the story she found in the local newspaper.

A local reporter visited Rosenmeier at Debert in 2005. She and her crew, including several Mi’kmaq, were excavating a portion of the site. Rosenmeier talked at length with the journalist about the site’s importance.

“I remember I was painfully clear. I probably beat a dead horse into the ground, except then that was the horse the journalist rode,” said Rosenmeier.

The story focused on her career instead of the site’s importance and the Mi’kmaq fight to reclaim it.

Science and mathematics are often misrepresented in mainstream media. Archeology fares no better – its purpose skewed, its results sensationalized and its subjects marginalized. That’s not always the case, but it’s often true. Archeology deserves better treatment. It reveals how different cultures and civilizations used to live. By not providing context, journalists convey a false picture of the past and misrepresent the heritage of living descendants.

Journalists often miss one of the main goals of archeology: learning about people.

What’s lost when this is done? “The humanity, the story of the people: they’re more than an object,” says Roger Lewis. Lewis is curator of Ethnology at the Nova Scotia Museum of Natural History​, and has a graduate degree in archeology. He is also Mi’kmaq.

Archeology, Lewis said, is about what can be learned, not just what can be found. It’s easy for journalists to lose sight of this.

A primary problem is treatment of artifacts. The coverage of the Muskrat Falls excavation, a large Innu settlement in Labrador dating back 2,800 years, exemplifies this. A Canadian Press article, published November 11, 2013 in several papers – including the Chronicle Herald online, with the headline “Over 40,000 Innu artifacts recovered from Muskrat Falls site” – emphasized artifacts and gave little context. There was no aboriginal perspective.

Scott Neilsen says there were problems locally because people heard the numbers without any context. Neilsen is a professor of archeology at Memorial University in Newfoundland who works closely with First Nations.

“Someone should have clarified that when they say 40,000 artifacts, the vast majority of those, probably 39,000 of them anyway, are flakes,” says Neilsen.

So what is an artifact?

Many things can make an artifact important – where it was found, what was found around it and whether similar artifacts exist. An artifact can be anything from a flake to an arrowhead; each contributes to what can be learned. Simply stating the number of artifacts can inflate a site’s significance.

Mainstream media’s “scattershot” coverage treats archeology as a “novelty,” says Michael Bawaya. Journalists “cover it as a cool thing rather than a science.” Not portraying the methods behind archeology prevents people from understanding what can be learned.

Bawaya is the editor of American Archaeology, published by the Archeological Conservancy, an organization based in Albuquerque, New Mexico. The Conservancy buys historic and aboriginal sites for their protection and preservation.

In American Archaeology, Bawaya strives to “explain the science of archeology to a general audience in an understandable way.” He gives readers “a sense of the importance of the science and how it can relate to their lives in the present.”

He also wants to make it an entertaining read.

So he tries to build up the archeologist’s story. He tries to give readers a sense of what it is like on a site – the working conditions, the hazards and the politics. He wants to show the challenges that archeologists face.

He doesn’t turn archeologists into Indiana Jones. He adds some excitement by showing how difficult an excavation can be and what some are willing to put into it. This thread of the story is always secondary to the story of the site.

When journalists disregard methods and emphasize artifacts they can make archeology seem like little more than looting.

Looters are what archaeologists call people who dig up artifacts to sell or collect – destroying sites in the process. People with good intentions, believing they are saving artifacts, can have the same effect; some enthusiasts, though, help protect sites. In Nova Scotia if a site has been designated a special place, looting is punishable under the Special Places Protection Act. Steve Davis is president of Davis MacIntyre & Associates Limited, an archeological consulting company based in Halifax. One morning he arrived at a historic site under excavation in downtown Halifax to find that overnight looters had used his company’s equipment to loot the site. The next day Davis found a historic milk bottle on Ebay for $300: it was labeled as having been recently dug up in Halifax. The authorities contacted Ebay and the listing was taken down, but its seller was never found. If convicted of disturbing a special place, the looter could have been fined $10,000.

On July 22, 2014 the CBC radio program Labrador Morning ran a piece on a man with a private “treasure trove” of aboriginal artifacts, including arrowheads and spearheads. He had no academic background and little knowledge of the people who had made the artifacts he was hoarding. The interviewer treated him as an authority and praised his collection.

“(Mainstream media) makes it seem like there is little rhyme or reason to it,” said Bawaya. “Like people just go out there with shovels and they just start randomly digging and they find things.” He stressed that archeology is not meant to merely build up museum collections. Indiana Jones always says “It belongs in a museum.” That’s not the real goal of archeology.

How a site works 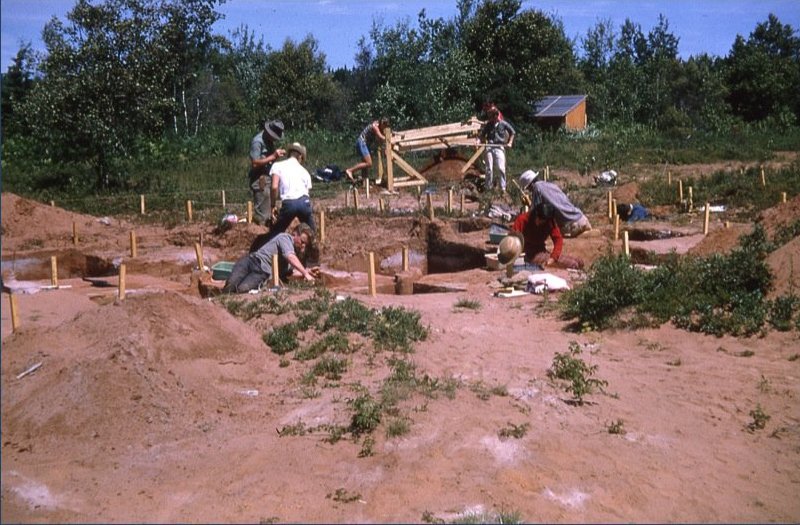 Sensationalizing stories is a similar problem. Make it mysterious, show some glitzy artifacts and call it the most important find in years – it’s an easy way to sell a story.

“It’s the oldest, the first, the biggest, the best; it’s always the –est,” says Tamara Stewart, an archeologist and journalist for American Archaeology. On September 23, 2014 CBC released an article online with the headline “Earliest sign of human habitation in Canada may have been found.” The story was about the discovery of a possible fishing weir off the coast of British Columbia. What becomes clear in the article is calling it the “earliest” sign of habitation is premature. Archeologists had not dated the find and were still not sure what they had found. The rest of the story was better than its headline. It discussed First Nations oral traditions – though it doesn’t present an aboriginal source – and provided some good context. But the headline sensationalized the discovery.

Journalists can also directly misrepresent the people behind a site.

When Roger Lewis walks through the First Nations exhibit at the Nova Scotia Museum of Natural History he is surrounded by the history of his people, the Mi’kmaq. Playing on a loop is a 1936 film of a Mi’kmaq porpoise hunt in Digby. Lewis recognizes the faces of his father, his grandfather, his grandmother and an old dog named Digby. He is invested in his people’s past and has spent much of his life trying to learn more. He wants to pass on that understanding.

Aboriginals have more than 10,000 years of history in Atlantic Canada. In Nova Scotia alone, there are more than 1,500 identified archeological sites, many of them aboriginal. When archeologists excavate sites they are not digging up an extinct culture. Aboriginal communities today are not distinct from their ancestors. Mainstream media does not always convey this.

Many aboriginals are invested in their heritage because they have a different perception of history than archeologists. Academics divide aboriginal history into different stages, often defined by shifts in technology. For most First Nations peoples history isn’t so divided. Lewis spoke with many community elders throughout Nova Scotia and said they were “fascinated” but bewildered by the academics’ stages. It’s not how they see their history.

“They see it from the very beginning to where we are today on a time scale,” said Lewis. “Which I think is wonderful. It’s a beautiful thing.” Aboriginals do not regard their ancestors as pre-history, so how journalists write about a site where those ancestors lived affects people living today.

Scott Neilsen sees “very little recognition” of the connection between contemporary aboriginals and their ancestors in the media. “It’s important to recognize that there are other ways of knowing and other ways of telling the story, and that the way archeologists are doing it is only one way,” he said. Aboriginals have their own sources of information, such as oral traditions.

Neilsen believes it’s crucial to include an aboriginal perspective in a story. But he also recognizes that’s not always easy. He knows most journalists work on the clock and can’t take the time he does to understand a site. If there isn’t enough time to track down an aboriginal perspective, he said, link to reputable sources that provides an account of their history. Link to a site report, if one’s available.

“Sometimes the archeologists and the descendant communities have a hard time talking to each other. So a reporter has that opportunity to tell both sides of the story,” says Neilsen. He doesn’t expect journalists to be middlemen in this relationship. But properly reporting a story could have the same effect.

If local communities are informed, their relationships with aboriginals could improve. It could prevent looting. It could stop people from mistreating sites. It could build cultural awareness.

In the 1980s Steve Davis, before his days as a company owner, was excavating a site off the coast of Yarmouth for Saint Mary’s University.

Belle Hatfield, a local journalist from The Vanguard spent some time on site. The story she wrote led local community members to contact Davis about items they had found. The local community became more aware of aboriginal history. Hatfield won an award for archeological coverage.

Later that week some of Davis’ students were talking about the site at a downtown bar. A journalist overheard them, pulled up a chair and asked a few questions. One day and a five-minute interview with Davis later, the Chronicle Herald ran the headline “N.S. Atlantis may lie in Bay of Fundy.”

“It was nonsense. He demeaned the First Nations, in a sense by linking it with Atlantis, by all this sensationalism,” said Davis.

The headline went “viral” in today’s terms. Davis did more than 50 interviews, he said, but the story persisted and was even translated into Hebrew and Arabic and broadcast in the Middle East.

Correction: In paragraph 33 the number of archeological sites in Nova Scotia is clarified. Originally the line read: "In Nova Scotia alone, there are more than 1,500 identified aboriginal sites." Correction made Dec. 8, 2014.